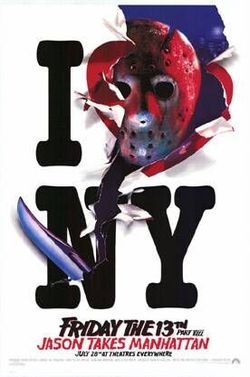 I think we would incur some kind of fine from the Luck Lords if we didn’t mention that today was Friday the 13th.  You just sorta hafta.

I reckon we should reflect on how lucky we were to see Grindhouse as a big double feature, since the news on the wire is that due to the frowny face it got at the box office, they’re going to split it into two separate movies for the Euro-release…and maybe here too as a re-release  (!!!)

That would be soooper-lame, methinks. It’s like saying "Here’s a chance to not see it in two theaters instead of one!"

This is all an unlucky shame, since I thought the movie and the experience of seeing it with a bunch of screamers was pretty awesome.  I know plenty of folks at whom the movie was supposedly aimed who disagree, but I think they’re just jealous they didn’t make it themselves.

That’s right, disgruntled Grindhouse haters.  I’m calling you out!  Unlucky for you!

*I better double-check and make sure I didn’t link to Hitchcock’s Rear Window by mistake, since they have the same plot.  Haw!  A catty exit for a mewling servant of the Luck Lords!