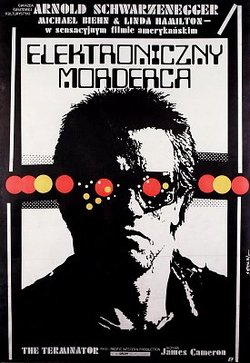 I know you’re at work now reading this because you need a break from the daily grind (don’t worry, I won’t tell anybody). It’s Friday, yes, but it’s been a long work week and the unseasonably cold weather makes the normal anticipation of a weekend spent relaxing seem a little less appealing when you’re worried about whether or not you’ll be shoveling snow in April.

So in the interest of both making your day go by faster and providing enlightening edutainment, I now provide a few links to some extraordinary images.

Stan Winston Studios was responsible for the uber-cool look of the Terminator robot, the Predator creature and updating H.R. Giger’s Alien design for Aliens, amongst other high-profile things (including the critter from the lower-profile but equally neat looking Pumpkinhead). There’s an expensive new book out about Stan’s studio creations that’s beautiful to behold, but for now you can check out the behind-the-scenes reels at his website for free. On a Friday. Via Monsterfest blog. Who loves you more?

Then there’s Tippett Studios. When stop-motion animation work dried up for animator Phill Tippett, he created go-motion (best remembered as the method that brought Vermithrax Pejorative to life in Dragonslayer) and has now become firmly entrenched in the digital realm to bring fictional creatures to life.

But not all character animation these days is being created exclusively on computers. Stop-motion animation legend Ray Harryhausen, who’s magical puppetry has graced films from Mighty Joe Young to the Sinbad movies of our youth, retired from the film scene many years ago but continues to give his endorsement to the highest-quality modern day purveyors of his art form. Check out the latest production to receive his blessing, an adaptation of Edgar Allan Poe’s The Pit and The Pendulum.

If you’re an aspiring efx technician yourself, of course, don’t let the work of these seasoned professionals intimidate you to the point of paralysis. There are people out there making good use of their souped-up home computers and affordable animation programs to produce witty genre short like this.

Have a great weekend, fellow adventurers.