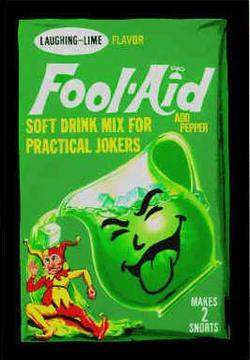 Sometime in 1986, my gang of friends and I stopped busting bottles on the construction site long enough to bike over to the mall theater to watch April Fool’s Day.  We had a sweet deal set up where we could stash the bikes in the alley behind the food court.

If you haven’t seen it, it’s no real loss to you, but you missed lines like, "Muffy hasn’t been in an institution for three years. She’s been at Vassar.

Regardless, it’s a pretty by-the-numbers, line ’em up, pair ’em into couples, kill ’em off flick, but it was the first time any of us ever saw a boom in the shot.  Halfway through the movie, a little soft black microphone cover wobbles in from the top of the screen and jiggles there for a long time.

We were in stitches.  Rolling and laughing.  Could not believe it.  I don’t even know if we knew it was called a boom.  We just knew some "movie bit" was dancing around above the blond girl’s head, and we gave the high-pitched mocklaugh of the superior-feeling new-teen.

Then it went away, and there was some suspense in the movie, and some decent looking people to look at, and we whispered and blew chewed popcorn into each other’s ears, and the boom came back.  Howling loud shoutlaughs designed less as a release of mirthful pressure but simply loud to let each other (and the rest of the theater) know we "got it".

Then it went away, and we were flushed and happy and people were killed and people escaped, and the boom came back a third time, and one of us was like, "Heyyy!  Haw!" and the rest of us betrayed him and kept silent.  We’d seen it before. Hadn’t he ever been to the movies?