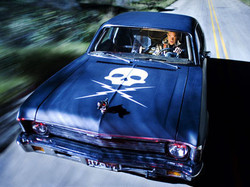 It is with trembling fingers and aching early-morning eyes that I type what you already know, Grindhouse opens today.  How our hearts here leap and laugh and play and sing at the prospect.

The last movie to get this kind of hype was Snakes on a Plane, which by any standards other than those measured by the pleasure one takes simply in being out of the house, was an abject disappointment.  Blame not the hype, however, blame film-makers who had no clue which buttons to push.  The hype for that film was a wave of ironic appreciation that went whimpering into low-tide the moment the first actual preview aired, and it was clear the "masterminds" hadn’t made what we thirsted for.

We want shlock, but we want engineered shlock.  Tarantino and Rodriguez not only know which buttons to push, they dismantled the machine with the buttons on it, rebuilt it and repainted it and put designer buttons on it for them to push.  Mother of pearl buttons!

I think, in short, the afore-mentioned thirst of our culture-parched throats will be slaked with cool, cool, exploitative water.  And despite the fact that both directors are personally as odious as it is possible to be, they know just how to pour.  Tilt thy wrists, noble directors, our mouths gape, our dry tongues fair heave in anticipation.  Start the projector already.

Brave indeed is The Reaping which dare-eth to open on the same weekend.  They say a coward dies a thousand deaths, and the brave but one.  A single death awaits ye, dear Reaping.  We salute you.