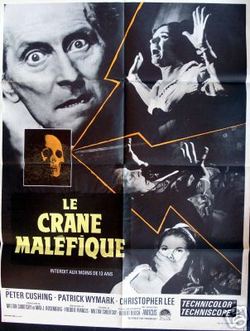 One of the finest actors ever to appear in a horror film, the late Peter Cushing never seems to get the same accolades that his peers like Christopher Lee do. But the man could act circles around Lee, who has always been more of a presence than an actual performer.

Cushing was one of those rare actors who, even when appearing in garbage like Corruption, was able to raise the level of the film, avoiding being dragged down to the film’s own level of awfulness. It’s hard to think of another actor who brought dignity and refinement to the worst, crustiest examples of the genre.

With the distinction of having played both Professor Van Helsing in the Hammer Dracula series and Baron Frankenstiein in Hammer’s other eponymous series, Cushing brought distinctive qualities to each character that will forever have him associated with two of the most famous names in horror.  Icons from other genres he portrayed in his own inimitable way were Sherlock Holmes and Dr. Who.

He earned the nickname "Props" because, if you watch him closely, he’s always picking up something during a scene to examine or fiddle about with.  Once you know to look for this affectation, you can make quite a drinking game out of it.  It’s kind of sad that the role with which contemporary audiences will be most familiar, Grand Moff Tarkin in the first Star Wars film, is one of the few in which he isn’t given any props.  Shame on you, George Lucas!

"Charming, to the last", indeed.