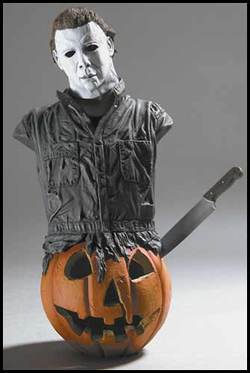 Michael Myers, famously written into the script of Halloween as "The Shape" is scary.  He’s scary because he looks like a big, expressionless guy who wants to hurt you.  The mask makes him seem like a force of nature that you can’t reason with or talk to or explain anything to.  The Shape doesn’t parlay.

The power of him as fearmaker is that he could be the thug at the gas station or your friend’s girlfriendless brother or any other lug in your life.  He wouldn’t work if he were a monster, because then you could just dismiss him as imaginary.

People talk, justifiably, about Halloween being one of the most influential films of the last century because of how it helped create a new genre, the slasher flick.  But, I think it’s overlooked that Michael Myers is one of the first "bad guys who won’t go down," and that’s an inversion of sixty years of movies about good guys with that power.

Westerns and war flicks from the fifties through the seventies are full of good guys getting shot or tied up and fighting through the pain to persevere .  They get beaten up and left for dead, then they come back and wreak surprise justice all over the villains, usually just in time to save the chicks the villains now feel they are free to menace.

The bad guys, Black Bart or Baron Fritz or whoever, usually crumpled after one swing from the Rock Fist of Tireless Justice, but Michael Myers absorbs that weaksauce.  You can empty a gun into him and knock him off the second floor, and when you run to the balcony there’s just an imprint on the lawn and the promise of a shadow behind you pretty soon.

He’s the bad guy with the indestructible powers of the good guy, and that’s what makes him innovative and influential.  That’s Todd Ravenface’s theory, anyway.

Plus, his face is a William Shatner mask spray painted white.  It doesn’t get much cooler than that.

Ten More Behind the Scenes Facts about the film here!