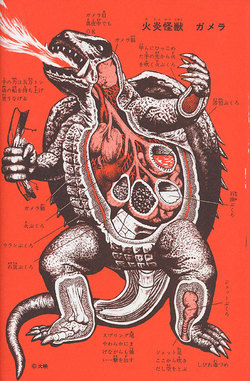 We’ll use our quote of the week to introduce our Monster of the Week, and we’re not fooling around.  You get an HP Lovecraft quote:

And what could be more unknown than the motives and desires of…The Dread Gamera?

He’s as enormous as his motives are mysterious, and he eats fire.  He just laps up those flames like they’re
flickering turtlefood pellets, and he looks at you with those sweet rolling turtle eyes and breathes it right back out.

We love our giant monster movies, from the radiation-soaked Japanese icons to the goofy lizards-let-loose-on-Monopoly-boards Roger Corman cranked out to keep a thousand thousand drive-ins in business, but there’s an extra special place in our heart for the soft underbelly of that flying flametongued tortoise-face.

Why, if I had him for a pet, I’d flip him over and tickle him and whisper, "Who’s my little Galapagos Guts?  It’s you, isn’t it?" and he’d wriggle his enormous legs, and radio towers would fall and seas would boil, and he’d reply, "Yeth!  I am!"  (but it would sound like that crazy static "skrrrawwww" sound that those guys make). He’d make a heck of a soup!

You’re also…our Monster of the Week!