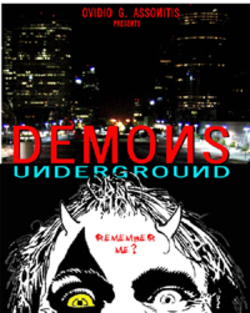 Remakes these days seem to be either of famous horror films that everyone has heard of (The Hills Have Eyes, Halloween, Texas Chainsaw Massacre, etc.) or overseas horror films that nobody has heard of but, according to the laziest (and let’s face it, downright racist) of Hollywood producers, need to be “Americanized” to be considered watchable by our native audiences (Pulse, The Ring, Dark Waters).

The original Pulse (directed by Japan’s best current genre director Kiyoshi Kurosawa — be sure to check out all of his uniquely quiet but very spooky films which have been recently released on DVD in the U.S.) and Ring films are excellent examples of Japanese horror films that owe nothing to American genre films of the past — and are, in fact, pretty forward-thinking prototypes for the direction in which modern terror films should be aspiring.

But… a remake of the Dario Argento produced and Lamberto Bava directed Demons?!?

The poster art you see above does not lie. Or does it?

It’s very common for poster artwork like this to be created for flyers and trade advertisements to see if a title will drum up interest amongst disbributors and other various money people. Which is why there’s no credits on it yet besides the name of producer Ovidio Assonitis — director of AMC movie favorite Tentacles with Henry Fonda and Shelley Winters — who’s seeing if this dog will hunt.

For now, it’s just a bad idea in theory as opposed to a stupid one already in production. So there’s always hope.

Welcome to the inner workings of the exploitation film industry. Fun, ain’t it?