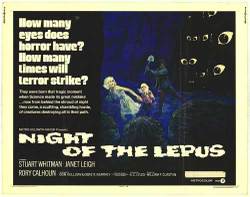 I know that some of you are disappointed that you didn’t see your favorite movie monsters in our Top 25 poll (I wanted to see The Blob myself), but we limited ourselves to 25, so some of the great ones missed the list.  However, there is another set that didn’t come anywhere near our list: Allow me to present moviedom’s least terrifying movie monsters:

It Conquered The World – This early Roger Corman effort pits Peter Graves and Lee Van Cleef against what appears to be a giant cucumber from outer space.  Van Cleef loses to said cucumber and right there all logic goes out the window, because Lee Van Cleef is only allowed to be defeated by Clint Eastwood.  No exceptions.

Night of the Lepus – Giant killer bunnies stampede through Arizona and only Stuart Whitman, Janet Leigh, and Deforest Kelly can stop them.  Yes, this is a real movie.

The Giant Spider Invasion – The giant spiders in question are actually VW Bugs covered in fur.  When they name the car a "bug", I don’t think it was meant to be taken literally.

Minilla, Son of Godzilla – We all grew up with Godzilla and we love him like a member of the family.  But we’ve been putting up with Minilla (a.k.a. Minya) for a long time.  And you, Minilla, are no Godzilla.

Did we miss any?  Let us know!