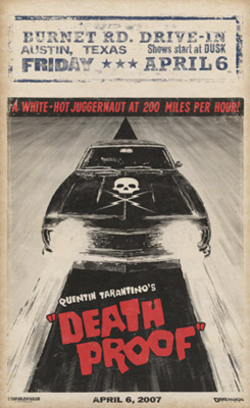 What a difference a week makes: After its disappointing opening last weekend, they’re now talking about cutting Grindhouse into two different movies and adding the "missing reels" back into the movie.  A longer Death Proof is fine by us.

Meanwhile, the Grindhouse toys have been announced.  We want a life size Zoe Bell!

The trailer to Rob Zombie’s Halloween has hit the net.  Looks like… another Halloween movie, to be honest.

Spanish horror icon Paul Naschy and director Carlos Aured will be reuniting to make a new Naschy-scripted horror film called The Seagull.  No relation to the Chekhov play, we’re sure, and bound to be a lot bloodier.

George Romero will be taking a small role in the upcoming Crispin Glover horror film I Scream Man.  We scream for George every chance we get.  We love you, George!!!

Brendan Fraser will return for The Mummy 3, while Rachel Weisz will not.  Too bad.

And finally, Uwe Boll must be stopped.  But we think you knew that already.