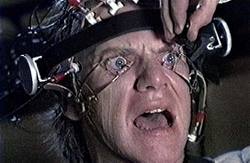 It’s not just the scary music, mind you. There’s literally something in the air — an atmosphere, if you will — that permeates the soundscapes of the scariest horror classics.

The avant garde musique concrete of The Texas Chain Saw Massacre doesn’t even register as music as much as it does amplified emotional distress. And although Bernard Herrmann is credited with composing the score for Alfred Hitchcock’s The Birds, there’s actually no conventional music at all — just the experimental electronic manipulations of Oskar Sala’s Trautonium. David Fincher’s recent Zodiac also had some innovative ideas about mixing music and sound efx.

Unlike your typical realistic, everyday film in which the verisimilitude of an environment is maintained by making sure everything seen on-screen has its proper, accompanying sound effect, the horror film is usually more selective in either magnifying a tiny sound to create intensity or dropping out all the sound entirely to generate the classic suspense of silence (or to highlight a single, frightening audio detail).

Willam Friedkin’s The Exorcist was one of the first movies I remember watching on VHS back in college with a set of headphones, and I remember marveling at the ingenious way in which the ambient background noise was amplified throughout to such ridiculously high levels that every single scene seemed to be the prelude to something awful about to happen.

Think about how many times a loud noise suddenly made you jump during an otherwise boring or stupid modern horror film. Sudden Noise Syndrome (SNS) — technically referred to as a “sting” — is the last resort of the lazy genre filmmaker and is the bane of modern horror cinema since it became regularly employed during the early 1970’s.

But now the “stings” are in room-shaking Dolby Surround. Remember to bring earplugs, kiddies.