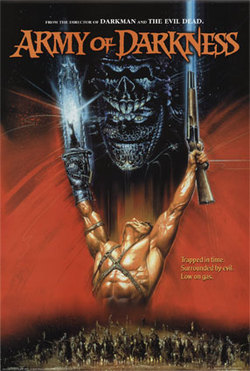 The third (and so far) final film in the Evil Dead trilogy, it’s also the trippiest and probably the only one of the series you can watch on network television with the satisfaction of knowing that it has been edited for violent content the least.

Of course, that doesn’t mean editorially there aren’t a number of variant editions of the film available for viewing. Which one will AMC be airing? The one with the S-Mart ending or the apocalyptic downer conclusion? And will Ash be saying “Good, bad — I’m the guy with the gun” or “I ain’t that good” after he kills his evil doppleganger? Half the fun of seeing it on TV is figuring out which version you’re watching.

Raimi’s fan-boy love letter to special effects legend Ray Harryhausen’s films, Army of Darkness has inspired a number of rabid fan websites (and soundboards like this one and this one), role-playing games, trading cards, comic books, statues, DVD releases and the fervent hope amongst its admirers that a fourth film is waiting somewhere in the pipeline.

Go here to check out some behind-the-scenes videos as well as a look at an alternate ending.