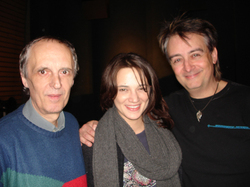 My Dario Argento radar continues to scan the internet for any news about his upcoming The Third Mother, but information has been relatively scarce despite the fact that (according to music composer Claudio Simonetti’s latest website post) both the Italian and English soundtracks — including the music — are almost complete.

Along the way, I stumbled across Simonetti’s very cool website (yes, you can shoot the bats!) which includes an English-friendly forum that he seems to regularly frequent to communicate with his fans. Claudio is both a very talented keyboardist and synthesist — a distinction that needs to be made about someone who’s been doing this kind of work for over 30 years as music technology has changed so drastically.

His most famous work is as a part of the group known as Goblin (or if you check out the poster for Night Of The Zombies, Golbin!), the band that so famously scored the original Dawn of the Dead (in association with Argento) as well as many Argento classics like Deep Red, Suspiria and Tenebrae — amongst others.

That’s a recent photo of Dario, his daughter Asia and Simonetti taken from his website, by the way.

More good news. Dario’s last classic era masterpiece The Stendhal Syndrome is coming from Blue Underground in an HD remasted transfer on DVD later this year, finally supplanting the absolutely wretched (and only previous U.S. release) Troma DVD from many years back.

Check here for more details and drool along with me.