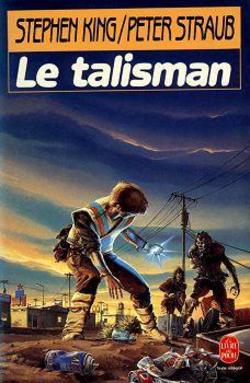 When I was just a little goatling, I read everything Stephen King put out.  I hunted down uncollected short stories in weird anthologies with titles like "Death!" (that particular one had a cool, crystal skull on the cover.  Crystal skull!) and I put myself on waiting lists for used copies of The Dark Tower (which was released first in some kind of super-ultra-you will never have this, little boy edition) and My Pretty Pony.

For some reason, though.  I never read the Talisman.  Maybe I "excused" myself from it because he had cowritten it with Straub, who I was only dimly aware of.  The movie Ghost Story based on his book had scared and confused me when I was superlittle, so maybe I was punishing him.

But I was punishing myself!  It’s totally awesome (maybe not crystal skull awesome, but still pretty amazing).  A little lunchroom nerdgirl had seen me reading The Dead Zone and asked if I had also read The Talisman.  I told her "no, it didn’t count," she told me, "Oh, it counts, baby.  It counts all the way to infinity," and she gave me her copy. Gave it to me!  Crystal skull!

Stubbornly, I avoided it, and then I had to avoid her.  I kept thinking she would ask if I’d read it.  I couldn’t lie or bluff.  It was too complicated.  The halls of our middle-school became a labyrinth of anxiety!  Would she be near the soda machine?  Would she ask about the book?

She went to a different high-school, thank the Goat, and I threw the book in a box.  But I found that box and I read that book, and oh, baby, what adventures I had.  It looks like it struck the folks at TNT the same way, because they’re making a giant mini-series out of it.  Dreamworks!  Look for it next Summer.

And lunchroom benefactor, I owe you an apology.  I sort of tore the cover.