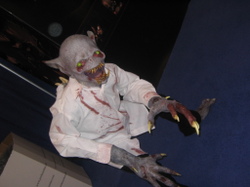 The best part about taking this thing’s picture at the New York Comic Con is that he shrieked and squealed at the flash and ran away.  He totally sold the character.

He stalked little kids and made hungry noises, and boy did he hate light.

He was probably part of a promotion for the new The Darkness video game.  That’s the one where you’re a mafia guy who takes out his opponents with guns, baseball bats and TENTACLES WITH MOUTHS!

There’s a trailer for it here.  I feel like we talk about comics on here a lot, but that’s what’s going on in the genre.  If it aint John Carpenter rema**s or video games becoming movies.

So, here’s an example of a comic book turned into a video game.  Will there be a movie?  Probably.  It’s too good a plot to ignore. Has there been a mafia-guys-get-supernatural-powers flick since this one?

When it does make the Leap to the screen, our cringing buddy above will wait for the lights to go down, that’s for sure.  Stay in the dark, little guy,  You’ll have your day.