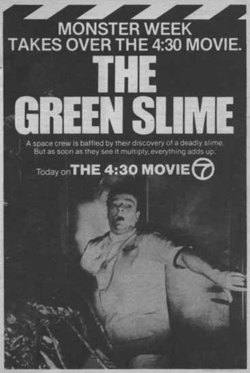 It’s not until I’m sitting around and talking with fellow horror film geeks my own age that I realize how old I am.  And the media culture has changed quite a bit since I first reached teenager-hood in 1979.

But my television-soaked youth was filled with many happy experiences that are especially potent to other folks who grew up watching the same mind-bending garbage that I did.

Before Channel 5 became Fox-5 (and was still WNEW), it had shows like The Hilarious House of Frightenstein.  What red-blooded American 8-year old kid didn’t come running home from school as quickly as possible to hear Vincent Price cackle during those unforgettable opening credits?  And as for the legendary Creature Features movie package….!

ABC Channel 7 had the much-beloved The 4:30 Movie, which would feature thematic programming like Planet of the Apes week, Godzilla week or Edgar Allan Poe week.  One shudders to remember just how severely edited many of these movies were to fit into a 90 minute time slot.

Channel 11 (before it was the WB, back when it was WPIX — feel free to yell PIX!! if you remember) used to have Science Fiction Theatre on Sunday afternoons, but the real thrill was the Saturday night Chiller Theatre slot with the most memorably freaky opening in the history of television.  If you remember that six-fingered hand rising from the lake of blood, then you probably also recall that it was scarier than almost any movie they actually showed.

And before the wrestling programs came in and filled the time slot, I’ll never forget the endless Saturday mornings logged in front of the flicker box taking in classic Tom Baker Dr. Who episodes on Channel 9 (before it became the CW — which was after being UPN — which was long after it was simply WOR-TV…).  They also had The Million Dollar Movie, which is where I’m pretty sure I remember catching Dario Argento’s Deep Red (aka: Profondo Rosso) for the first time — cut to pieces for violence and to fit commercials, and ruinously cropped from it’s magnificent widescreen ratio to idiot-box square size.  Nevertheless, it blew me away and made me a fan.

This was when the media world was still relatively young, of course, and stations even used to go off the air in the wee hours of late night.

Needless to say, in the opinion of this viewer, it might do many stations a lot of good to go off the air every now and again in this over-saturated television world.

(That 4:30 Movie ad to the left, by the way, was nicked from the DVDdrive-in.com website which has an excellent article and many more marvelous examples)