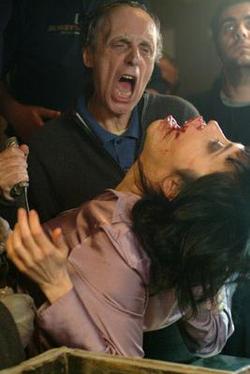 I was cruising the web to see how Dario Argento’s latest project, La Terza Madre (The Third Mother), is coming along. If you speak Italian or enjoy using the babelfish translator, feel free to check out his progress here. In a nutshell, the Italian premiere date has been pushed back to Halloween 2007 and releasing company Medusa Films is already quite nervous about the content and is requesting edits.

Based on an early draft of the script I read some time back, I can understand Medusa’s reticence. It was a very extreme screenplay and I’ve heard that since this initial draft things have only gotten even more explicitly violent.

Along the way, I stumbled across the latest work of a composer named Simon Boswell, who contributed some music to a couple of Argento-related projects like Phenomena (ie: Creepers) and The Church.

If you’re a fan of either, you really need to see this music video (directed by the professionally quixotic but delightful Richard Stanley, for whom Boswell composed the wonderful Dust Devil score) for Boswell’s Tripping The Dark Fantastic, as it stars Dario Argento himself. Dario’s not quite singing, but he’s not NOT singing either…

Boswell is also working on a series of mini-movies of famous people blinking which he has scored with music as a commentary on media manipulation of news footage (all viewable at his website). It’s pretty interesting stuff and if you watch his little documentary he makes some pointed observations.

So Boswell the musician is now a movie maker and Argento the filmmaker (and a legitmate Maestro of Horror, unlike so many pretenders) is now starring in music videos.

I thought these kind of freaky transferences only happened on Fridays…?