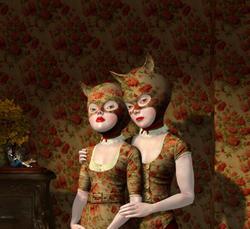 These girls could be those creepy twins from The Shining, like off camera, waiting in one of the rooms for someone to walk in, waiting to be invited to the haunted ball downstairs.  Wild.

They’re the work of this artist who has some kind of eye for color and design and detail, and flat-out surreal creepfactor. When they make a movie with this kind if imagination behind it, I’m there.

When was the last time a lot of imagination was put into character design?  It feels like most of the aliens and monsters are retreads of Giger’s stuff or copies of copies.

I’ve seen slugs and aliens and bat-people and wolfmen.  They’re from the land of Ten Thousand Yawns.  Bring back the weird!

And where are my period horror movies?  We had Brotherhood of the Wolf a few years back with its screwy revolutionary France-era armored zombie wolf.  That’s the kind of thing that makes you lean forward in your seat and wonder what’s going on.  I want to shout "What am I looking at!"  That’s what you pay for.

But that movie sort of…wasn’t..exactly…well…good.

Where’s my World War One Movie where they’re digging a trench and unearth an ancient evil?

Where’s my Dark Ages summoning spell gone wrong flick?  Wait.  They made that. 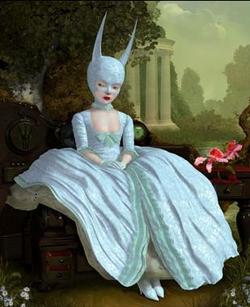 This girl better be in it.

Bring back the weird.  Let’s have some design.

Potential horror movie plots based in eras other than our own.  Go!