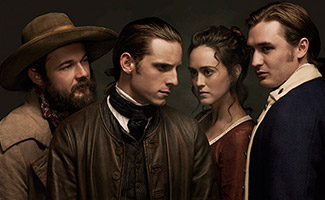 This week, it’s announced that TURN: Washington’s Spies Season 1 will be released on DVD in March, while the College of William & Mary will host an event with the cast and crew next month. Plus, RedEye details how you can catch up on Season 1. Read on for more:

• Why So Blu? reports that Season 1 will be available on Blu-ray + Digital HD and DVD on Mar. 17.

• The Virginia Gazette reports that the College of William and Mary will host a discussion next month called “Television, History and Revolution” that will feature the cast and producers of TURN: Washington’s Spies.

• RedEye recaps the AMC panel at the TCA winter press tour and says those who missed Season 1 of TURN: Washington’s Spies can catch up on AMC On Demand, AMC.com and Netflix.

• Broadcast reports that Amazon has struck a deal to show TURN: Washington’s Spies on its Prime Instant Video service.