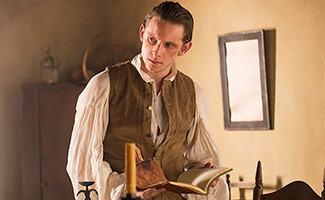 This week, The Washington Post mentions TURN: Washington’s Spies as one of the TV shows it enjoyed in 2014, while Zap2it and The Huffington Post have Season 2 photos of Ksenia Solo as Peggy Shippen. Plus, TURN‘s Virginia location helped increase the state’s coffers. Read on for more:

• TURN: Washington’s Spies gets a mention in The Washington Post‘s list of the best TV of 2014.

• Richmond’s WTVR reports that Virginia reaped the rewards of increased TV and film production in the state last year, citing TURN: Washington’s Spies as an example.

• According to Collider, Guillermo del Toro says that Burn Gorman will reprise his Pacific Rim role in Pacific Rim 2.