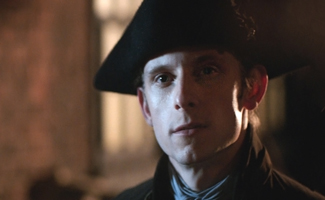 • According to The Hollywood Reporter, TURN: Washington’s Spies has cast Owain Yeoman to play Benedict Arnold in Season 2.

• Also according to The Hollywood Reporter, Ksenia Solo has joined the cast as a series regular. Solo will play Peggy Shippen, a Philadelphia urban sophisticate who navigates the complications of her family’s pro-British politics in the Patriot capital.

• Talking to TV Guide about historical accuracy in entertainment, Craig Silverstein says, “I had to go through a process by which, after studying the history, I could step away from it and invent some things.” [No link]

• The Miami Herald checks out the popularity of espionage stories in American popular culture, citing TURN: Washington’s Spies as an example.

To stay up-to-date on all the latest news about TURN: Washington’s Spies, sign up for the TURN Dispatch email newsletter.