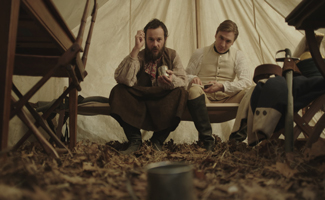 This week, PopWrapped celebrates TURN: Washington’s Spies’ renewal and calls the show “genuinely one of the best dramas on TV today,” while Craig Silverstein tells Enstarz that Abe is “all in” for Season 2. Plus, Special Cable Deals.com wants to see more of Anna Strong and Benedict Arnold in the new season. Read on for more:

• PopWrapped calls TURN: Washington’s Spies “genuinely one of the best dramas on TV today” and that the tale of Abraham Woodhull “will surprise you in how exciting it really is.”

• Special Cable Deals.com makes a list of what it wants to see in TURN: Washington’s Spies’ second season, namely an expanded role for Anna Strong, “one of the show’s most interesting characters” and an exploration of famous British spies like Benedict Arnold.

• Cinema Blend spotlights “the tweet heard round the world” about TURN: Washington’s Spies’ renewal and TV Over Mind wonders if the series will “blossom from bud to rose” like past AMC power-hits. Digital Spy, The HD Room and Asbury Park Sunday Press report on the second season renewal as well.