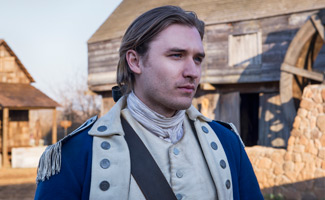 • Zap2it speaks with series showrunner Craig Silverstein, who discusses what viewers might see in a Season 2, including “how the Culper Ring was instrumental in turning the tide one way or the other with their intelligence.”

• The Independent‘s review of the Donmar Warehouse production of Fathers and Sons applauds Seth Numrich, who “splendidly captures the charisma and the smug more-radical-than-thou manner” of his character.

• Assignment X interviews Jamie Bell, who says that “original storytelling is happening in television. Character development and opportunity for actors is in television for the most part.”

• Screen Crush had a clip from the season finale, noting, “Only one episode remains until AMC’s Turn comes to an exciting first season conclusion.”

• For recaps and reviews of the season finale, “The Battle of Setauket,” check out Den of Geek, Entertainment Weekly,Guardian Liberty Voice, IGN, Pop Eye, TV Equals and Zap2it.