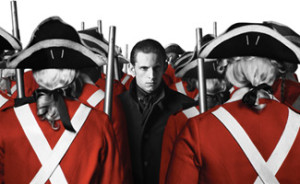 This week, The Washington Post previews TURN, while Jamie Bell chats with the Los Angeles Times about his character on the show. Plus, President George H.W. Bush hosts a screening of TURN. Read on for more:

• The Washington Post‘s preview of TURN notes that the drama “asks its audience to regard the revolution as a far more complicated period than most of us learned about as children.”

• Jamie Bell tells the Los Angeles Times that, at the start of the series, his character Abe is “somewhat emotionally arrested, he’s shut down, he’s withdrawn and debased.”

• According to The Hollywood Reporter, President George H.W. Bush hosted a private screening of TURN. His review? “A brilliant show, a fantastic cast, there’s one problem however, and that’s waiting till the next episode.”

• HitFix interviews Jamie Bell about the Culper Ring spies, who all “took on an incredibly dangerous enterprise and the risk was death.”

• The Chicago Sun-Times previews TURN, describing it as “a promising show about a relatively unexplored chapter in U.S. military history.”

• The Detroit News commends TURN for becoming “more tense with each episode, at least through the first three, and that’s a very good sign.”

• Nashville Scene believes that TURN has “the potential to become another breakout show for AMC.”

• McClatchy-Tribune News Service talks to Jamie Bell about growing up a child star.

• The Week names TURN its show of the week and calls it a “suspenseful” new series. (No link)

• C-Ville Weekly interviews a local company that did the casting for TURN.

To stay up-to-date on all the latest news about TURN, sign up for the TURN Dispatch email newsletter.