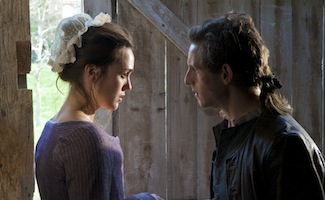 This week, Entertainment Weekly predicts TURN will become AMC’s next prestige drama, while the Philadelphia Daily News checks out spy shows like TURN. Plus, catch a new trailer for the show.

• In its spring TV preview, Entertainment Weekly is excited about TURN because this “risky period piece is poised to be the network’s newest prestige drama — intense, gritty, and packed with all-American adventure.” [No link]

• The Philadelphia Daily News examines spy stories on TV, including TURN which can be considered “the first spy story.”

• Jamie Bell talks to The Guardian from the set of TURN about his new movie, Nymphomaniac.

• Craig Silverstein tells Richmond’s WRIC that filming in central Virginia works well for TURN because “there are so many places that we can find, both in nature and also actual historical sites.”

• On the same topic, Seth Numrich tells Richmond BizSense, “It’s been really great to film in buildings as old as the time period we’re trying to replicate.”