The Walking Dead has had its fair share of shocking moments, but even by TWD standards, Episode 7 was a doozy.

CAUTION: MAJOR SPOILERS FOR EPISODE 7 AHEAD – BEFORE YOU READ FURTHER, WATCH THE EPISODE ON AMC.COM AND THE AMC APPS

Repeat: Dante is a Whisperer. To add to that gut-wrenching twist, as the episode comes to a close, he’s choking the life out of Siddiq.

This is hardly the first time TWD has uncorked an out-of-nowhere twist on its fans. One of the things everyone loves is that those walkers and villains keep everyone on their toes. In honor of Dante’s and Alpha commitment to the element of surprise, take a walk down memory lane with 10 of the most shocking twists in TWD history.

Rick Finds Bicycle Girl
There’s literally zero time wasted before the first big shocker special. In the series’ opening scene, Rick (Andrew Lincoln) approached a little girl and…. boom, that’s no little girl, but a snarling zombie with a gnarly hole in its face. If that doesn’t set the tone for what’s to come, nothing does. 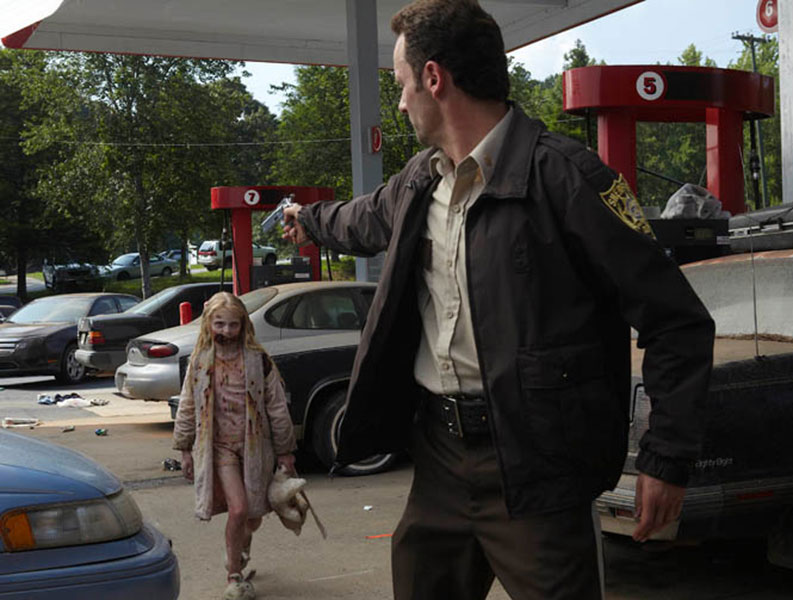 Walker-Sofia Emerges From the Barn
When Sofia emerges from the barn after the group’s long, and ultimately doomed, search for her, it’s the first of many gut punches for Carol (Melissa McBride) and one of the truly extraordinarily moments in the show’s history. Even though hope of finding Sofia has all but been given up, nobody is really prepared for the emotional blow of what’s to come. 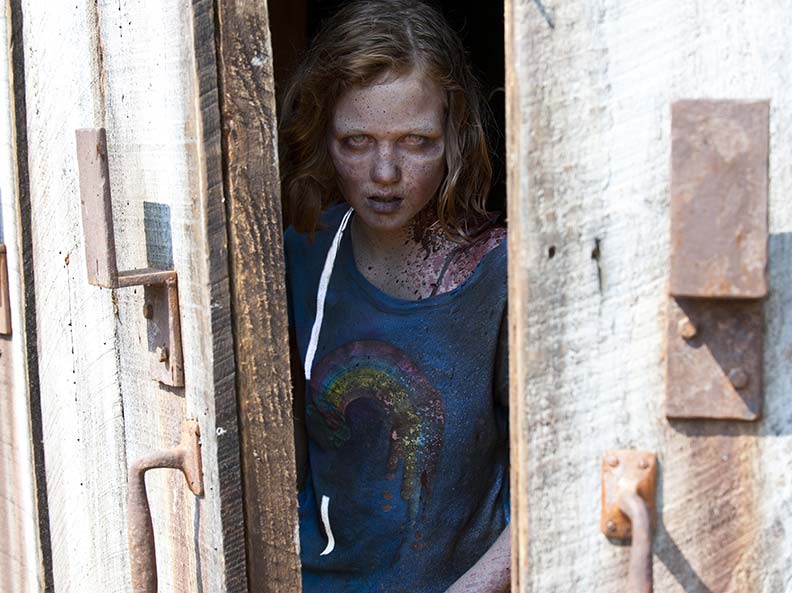 Rick Kills Shane
In a scene so tense it’s hard to watch, the long-simmering rivalry between Rick and Shane finally spills out into the open. It seems that one could kill the other a half-dozen times. And then when the moment for the showdown finally arrives, Rick won’t raise his weapon. Except it’s all a ruse to bring Shane close and stab him in the heart. It’s a truly astounding moment that reverberates for years.

Rick Reveals Everyone Is Infected
At the end of Season 1, Dr. Jenner whispers to Rick “We’re all infected…whatever it is, we all carry it.” But Rick keeps this information a secret from his fellow survivors, and the audience, all the way to the Season 2 Finale, when he delivers this gut-punch revelation. It’s game-changer that turns the entire world of TWD on its head and changes the modus operandi of the survivors and the stakes of the universe itself. 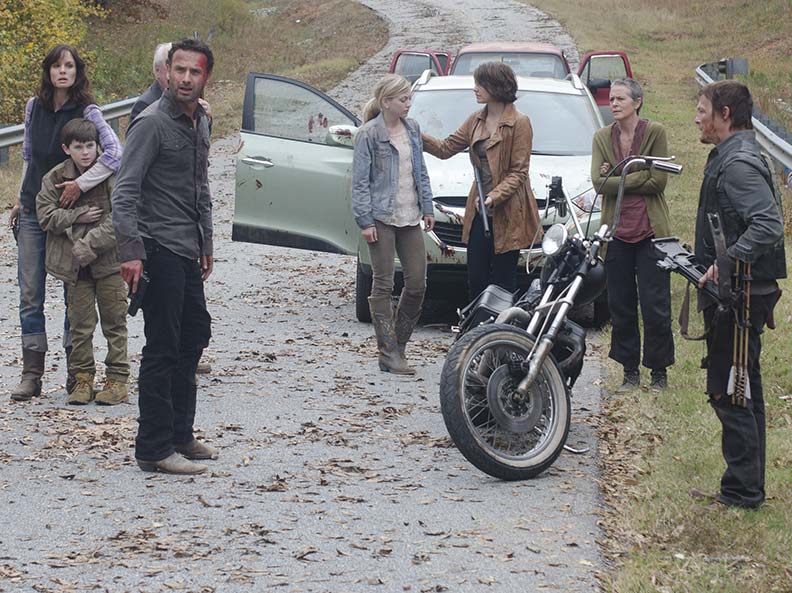 Carol Kills Lizzie
In the long list of gasp-inducing Carol moments, few loom larger than the discovery that Lizzie has murdered her sister Mika for sport and Carol’s subsequent decision to kill a Lizzie, a child, on her own. Nobody saw that one coming.

The Terminans Eat Bob’s Leg
When Bob is abducted outside Gabriel’s (Seth Gilliam) church, you know nothing good is going to come of it. But it would have been hard to imagine the precise horror to come when Bob awoke by a campfire, looked down at his missing leg and heard Gareth say “If it makes you feel any better, you taste much better than we thought you would…”

Eugene Admits There’s No Cure
Think back to a time when Eugene (Josh McDermitt) promised salvation from a world of the undead menace. Yes, that mulletted weirdo was headed to DC for a cure. When he revealed that he’s a fraud, and no such cure existed, it set the survivors and the entire show on a different path.

Undead Sasha Launches out of the Casket
In Season 7, Negan (Jeffrey Dean Morgan) seemed invincible. He’d killed Abraham and Glenn and forced the survivors into subservience. And even once the survivors fight back, their efforts weren’t going well. Eugene had turned traitor. Sasha had been captured and forced into a coffin as part a stunt to subjugate Alexandria. But when that coffin opened: Boom, out jumped walker-Sasha, piercing Negan’s invincibility 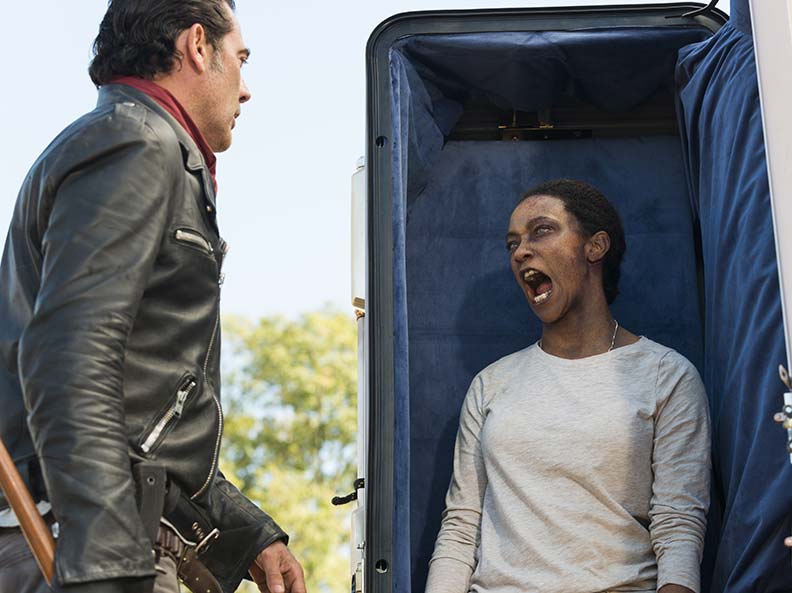 , starting the battle of Alexandria and setting the survivors on the course to their eventual victor, right out of nowhere.

Rick Lives!
Rick’s dead right? The bridge he was on exploded. He’s gotta be dead. No, in one of the best moments in TWD history, Rick’s alive and kicking, just barely, as Anne comes across him, gravely injured, and negotiates to have him taken away in a mysterious helicopter, setting the stage for his story to continue in a new corner of the apocalypse.

The Whisperers Change the Rules
For nearly a decade, fans and the survivors got used to walkers behaving a certain way, which is why our heroes usually triumphed. And then, in an eerie graveyard, all that changed in the blink of an eye. Jesus is taking out walkers with his trademark flair when one of them fights back and stabs him. That… can’t have happened? It’s a jaw-dropping moment and nothing has been the same since.

For more insight into the events of the shocking twist at the end of Episode 7, read an interview with Juan Javier Cardenas (Dante).

For exclusive content from Season 10, trailers, cast interviews and more, sign up for the weekly The Walking Dead newsletter.