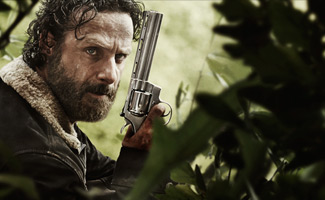 Today the Screen Actors Guild announced their nominees for the 21st Annual SAG awards and The Walking Dead was honored with a nomination for Outstanding Action Performance by a Stunt Ensemble in a Comedy or Drama Series for the second straight year.

The Walking Dead team will face stiff competition for the award, competing in the category against the 2014 winner, HBO’s Game of Thrones, as well as FOX’s 24: Live Another Day, HBO’s Boardwalk Empire, Showtime’s Homeland and FX’s Sons of Anarachy.

The SAG Awards will air live Jan. 25 at 8/7c on TBS and TNT from the Shrine Exposition Hall in Los Angeles.