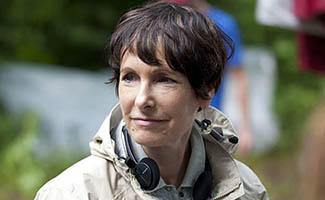 This week, Gale Anne Hurd will be presented with the Stan Lee Lifetime Achievement Award, while The Walking Dead battles Game of Thrones in Entertainment Weekly‘s TV Fight Club. Plus, Andrew Lincoln talks to The Hollywood Reporter about the last line of Season 4. Read on for more:

• TheWrap reports that Gale Anne Hurd will be presented with the Geekie Awards’ Stan Lee Lifetime Achievement Award from Stan Lee himself.

• The Walking Dead (which “presents a post-apocalyptic vision of humanity on a death march that’s unlike anything we’ve ever seen”) battles Game of Thrones in Entertainment Weekly‘s TV Fight Club.

• Wetpaint has a video clip of Rick saying the last line of Season 4 the way it was meant to be said, calling it “More intense. More badass. More menacing. More I just bit a guy’s neck, now I’m comin’ for yours.” Meanwhile, Andrew Lincoln tells The Hollywood Reporter he pushed to have the season 4 finale “end with an F-bomb.”

• Sharon Bialy and Sherry Thomas talk to GoldDerby about their mission to cast as many actors from The Wire as possible on The Walking Dead.

• Entertainment Weekly posts a video of a deleted Season 4 scene (available on the Season 4 DVD and Blu-ray sets on Aug. 26) featuring Hershel and Michonne held prisoner by the Governor.

• Norman Reedus will star in the next “Silent Hill” video game, which is being developed by Guillermo del Toro and Hideo Kojima, Variety reports.

• Sarah Wayne Callies does a Reddit Ask Me Anything and answers several The Walking Dead-related questions. Wetpaint has the highlights.

• Den of Geek interviews Sarah Wayne Callies, who calls The Walking Dead “one of the best jobs I’ve ever had and we were able to really learn from each other as actors and as crew and as writers and directors.”

• Laurie Holden shares a photo with Wetpaint of the members of The Walking Dead cast that she calls, “My fave pic of all time.”