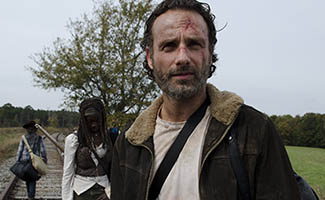 This week, AMC reveals a photo of Andrew Lincoln as Rick in Season 5 while Robert Kirkman talks to comedian Doug Benson. Read on for more:

• Entertainment Weekly has a first look at Andrew Lincoln in Season 5 and, lamenting that the photo “doesn’t show much,” tries to draw some inferences.

• The Walking Dead tops 411 Mania‘s list of the best live action comic adaptations on TV because “anyone can die at any time.”

• Jeff Kober speaks with 100.3 Jack FM about Joe’s demise in the Season 4 finale, saying, “I’ve died on a lot of shows but that was a very special death.”

• Meyrick Murphy tells The Walking Dead Forums about Meghan’s death, “It was kind of fun getting killed by a walker. It’s not something you get to do every day.”