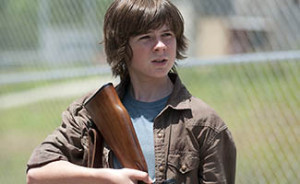 This week, several publications choose The Walking Dead as one of the year’s top shows, while Carl’s survival skills are touted by Scott Gimple in TV Guide. Plus, Vulture looks closely at 2013’s TV ratings, which reflect well on The Walking Dead. Read on for more:

• Us names The Walking Dead one of the year’s most outstanding TV shows, saying, “This zombie drama ramped up the action with a classic hero/bad guy rivalry.”

• TV critic David Bianculli considers The Walking Dead one of 2013’s best, describing it as “an amazing show.”

• The Boston Herald calls The Walking Dead one of the shows worth watching this year because it “went beyond zombie scares” and “pushed its characters into dangerous moral quandaries.”

• Scott Gimple tells TV Guide that, when the series returns in February, viewers should expect Carl to “to step up quite a bit because circumstances are wildly different and a lot will depend on him in terms of them just surviving.”

• Vulture takes an in-depth look at this year’s TV ratings, and Wetpaint points out that The Walking Dead does well, even upon close examination.

• USA Today pays homage to TV’s gone-but-not-forgotten, like Hershel, the Governor and Andrea.

• Meanwhile, Andrea’s demise was one of the year’s top 10 TV deaths, according to E! Online, and the Toronto Star calls Hershel’s murder by the Governor “perhaps the saddest of recent TV deaths.”

• Salon honors Patrick and Nick as two of the year’s most thankless TV roles.

• Wetpaint makes a case for The Walking Dead’s best moments this year, from Merle’s death to the all-out war between the Governor and the prison survivors.

• Forbes gives The Walking Dead an honorable mention in its list of the year’s best dramas.

• TV Media Insights names The Walking Dead one of the year’s top shows because it “maintained its supreme quality in storytelling and provided depth for its cast of characters.”

• One of TV Fanatic’s nominees for the year’s best villain is the Governor: “He slaughtered his own people! The man was straight evil!”

• Citing The Walking Dead’s use of Senoia as an example, the Atlanta Journal-Constitution explains that Georgia towns are hoping to “plump tax coffers and retail receipts” by serving as TV and movie locations.

• The Baltimore Sun’s New Year’s Eve viewing guide is topped by The Walking Dead marathon on AMC: “Conceivably you can watch the entire series run of The Walking Dead in three days. And by ‘conceivably,’ I mean ‘you should.’ I won’t judge.”

• IronE Singleton and members of The Walking Dead’s crew tell The Weather Channel about the special production challenges posed by Georgia’s extreme heat and humidity.

• Bloody Disgusting highlights AMC’s video tribute to the Governor, “one of the show’s greatest villains.”