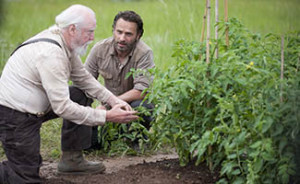 This week, The Walking Dead is named one of the best cable dramas by The Hollywood Reporter and is also revealed to be the most popular TV series on the major social media outlets. Plus, Scott Gimple and Greg Nicotero discuss the ins and outs of the midseason finale. Read on for more:

• The Hollywood Reporter ranks The Walking Dead as one of the 20 best dramas on cable TV, calling it “gripping” television.

• Yahoo TV gleans some insights into the midseason finale from Scott Gimple and Greg Nicotero, including why Hershel had to die in such a brutal way.

• Norman Reedus has a new book of photography: The Sun’s Coming Up… Like A Big Bald Head.

• In a podcast, Gale Anne Hurd explains to The Walker Stalkers why a midseason break “works for our particular brand of storytelling.”

• The Screen Actors Guild honors The Walking Dead with a nomination for outstanding action performance by a stunt ensemble, reports The Huffington Post.

• NPR makes the case that The Walking Dead is “essentially a show about hope.”

• The Los Angeles Times takes a closer look at The Walking Dead’s ratings and concludes that the drama has “evidently discovered some kind of anti-aging miracle potion that allows it to defy typical TV ratings trends.”

• Media Life was the No. 1 series among the coveted demographic of adults 18-34 on broadcast or cable this season, the first time ever for a cable program.

• IMDb‘s users rate The Walking Dead the year’s No. 3 show.

• The Globe and Mail describes The Walking Dead as “enormously successful, possibly the most important TV series in years.”

• This season’s most shocking TV deaths, according to TheWrap, include Andrea, Hershel and the Governor.

• Comic Book Resources relives some of Season 4’s most “heart-stopping and head-lopping moments” so far.

• After viewing the “explosive” midseason finale, The Express-Times poses several questions that will hopefully be answered in the season’s second half.

• TV Overmind notes the “subtle” and “brilliant” return of Clara, who appeared in the Season 4 opener, in the midseason finale.

• Digital Spy opines on seven of The Walking Dead’s biggest shocks, from Shane feeding Otis to the walkers to Morgan’s Season 3 return.

• Wetpaint takes a look at AMC’s inside look at the midseason finale, where Robert Kirkman teases that “a lot of these characters are going to come out of this group of episodes dramatically changed from how they’ve been.”

• The Chicago Tribune reports on the two-day The Walking Dead marathon that will start airing on New Year’s Eve.