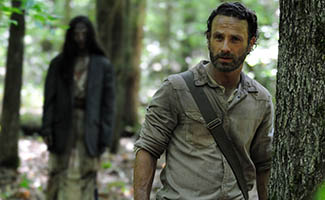 The fans have spoken and The Walking Dead has earned three nominations for the 2014 People’s Choice Awards. The series is up for Favorite Cable TV drama, Favorite Sci-Fi/Fantasy TV Show and Favorite TV Anti-Hero.

AMC’s hit series faces formidable competition for the awards. Also competing for Favorite Drama is PBS’ Downton Abbey, ABC Family’s Pretty Little Liars, FX’s Sons of Anarchy and USA’s White Collar. Also nominated in the Sci-Fi/Fantasy category are The CW’s Beauty and the Beast, Vampire Diaries and Supernatural, and ABC’s Once Upon a Time. Rick Grimes will square off against Dexter Morgan (Dexter), Jaime Lannister (Game of Thrones), Norman Bates (Bates Motel) and AMC’s own Walter White (Breaking Bad) for the Anti-Hero award.

Winners will be announced live from the Nokia Theater Wed., Jan. 8 on CBS.