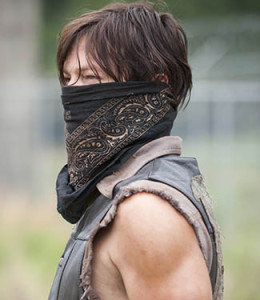 This week, Norman Reedus and Steven Yeun do the talk show circuit, while Scott Gimple chats with The Hollywood Reporter. Plus, Reedus poses with his cat. Read on for more:

• The View hosts Norman Reedus, who says zombies aren’t scary because of their make-up. Rather, “It’s the scared, lost dying person behind the monster that’s scary.”

• Steven Yeun talks to Craig Ferguson on The Late Late Show about trying to grow a mustache and why he’s not allowed to do it for The Walking Dead.

• Scott Gimple teases to The Hollywood Reporter that this week’s midseason finale “fulfills the story of the first seven episodes. It is very much an ending of sorts for a lot of these characters’ stories.”

• Lauren Cohan talks to Eide Magazine about Maggie: “Even within the boundaries of her southern, religious upbringing, there is such a feistiness about her.” Cohan also speaks with The Philadelphia Inquirer about her background and how best to kill a zombie.

• The Hollywood Reporter highlights a German ad campaign for The Walking Dead that targets female viewers and features models that morph into zombies.

• Wetpaint reports there will be a Season 4 marathon for The Walking Dead this weekend.

• Screen Crush does a comic vs. TV show comparison for “Dead Weight.”