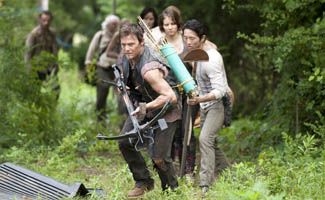 This week, Entertainment Weekly gets the inside scoop on Danai Gurira learning to ride a horse, while Wetpaint tries to get more information on the new Season 4 threat from Dave Alpert, Plus, ComicBookMovie.com speculates which character will be the next one to perish. Read on for more:

• Entertainment Weekly learns from Danai Gurira how she dealt with riding a horse and why she thinks Michonne loves this “fantastic animal.”

• Speaking with Wetpaint, Executive Producer Dave Alpert teases that the new Season 4 threat is “going to sort of spiral everything out, sort of spin it all out in a way that, if you thought you had a handle on what the threat was before, you’re wrong.”

• ComicBookMovie.com tries to figure who’s “next on the chopping block” on The Walking Dead.

• The Newnan (Ga.) Times-Herald examines The Walking Dead’s positive effect on local businesses in Georgia’s Coweta County, where much of the show is shot.

• One reason why black women will rule on TV this fall is “because Michonne gets to kick ass,” according to Essence. [No Link]

• FEARnet features a cosplay piano version of The Walking Dead, calling it a “beautiful ode to a zombie masterpiece.”

• Dread Central checks out the Season 3 limited edition fish tank Blu-ray set that “everyone is losing their heads over.”