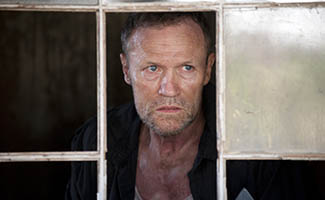 This week, Michael Rooker chats with The Huffington Post, while Laurie Holden talks to Crave Online about Andrea’s death. Plus, Gale Anne Hurd discusses some key Season 3 deaths with TV Equals. Read on for more:

• Michael Rooker shares with The Huffington Post that Merle’s knife-arm was “hot and sticky and it caused nerve damage and I loved it.”

• Gale Anne Hurd tells TV Equals, “Losing Sarah Wayne Callies, losing Laurie Holden in one season was about as much as I could personally take without collapsing in a puddle of tears myself.” Hurd also talks to Collider.com.

• Producer David Alpert teases to Zap2it that Season 4 will be “bigger, better, meaner.”

• As reported by ComicBook.com, Michael Rooker talks about Merle discovering the scars on Daryl’s back.

• With San Diego Comic-Con on the way, AMC reveals the Season 4 banner that will be on display at the event. The Huffington Post opines that it “looks really cool.” Cinema Blend thinks the characters on it “look like warriors and if the sight of them wielding their weapons against hoards of walkers doesn’t get you excited for Season 4, I don’t know what will!”

• ComicBook.com spotlights Gentle Giant’s Michonne mini-bust, which will be on sale at San Diego Comic-Con.