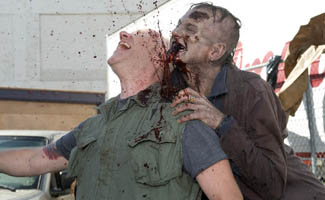 Today the International Academy of Digital Arts & Sciences announced their nominees for the 17th annual Webby Awards, and The Walking Dead – Cold Storage webisodes were honored with nominations in the Writing and Drama categories.

The nominations are part of three netted by AMC.com this year, with the episode behind-the-scenes video series Inside Breaking Bad getting a nod for Branded Entertainment Unscripted. (Click here to learn more about Breaking Bad‘s nomination.)

In the Drama category, The Walking Dead is nominated alongside Yahoo!’s Tom Hanks’ Electric City, Zanzibar Films’ Cuckoo, Pereira & O’Dell’s The Beauty Inside and chasing the hill’s Chasing the Hill.

The winners will be announced during a ceremony on Tue., Apr. 30.