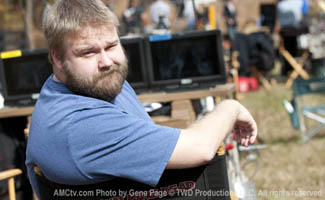 In Part 2 of his fan chat, The Walking Dead Executive Producer and Writer Robert Kirkman talks about the possibility of Daryl finding romance in Season 4 and shares his thoughts on living life as a zombie.

Q: Can you shed any light into how the Governor’s story will continue…or close in Season 4? —Jeffrey Hawboldt

A: I can say the Governor will certainly be around. But we’ll be seeing him in a new light, and doing some different stuff with him, so it’s not going to be the same Governor in Season 4.

Q: I find it hard to believe the most badass dude in the zombie apocalypse is the only guy not getting laid! Will Daryl ever have a love interest? —Johnny Zimmerman

A: Never say never! I think that it could happen eventually. I wouldn’t want to spoil anything, but Daryl is a complex character and he’s really got a lot of emotional hurdles to get over in his life. It is kind of odd that we haven’t seen him in that kind of romantic light, but I think that adds a layer to the character that makes him a little more mysterious and a little cooler. But I wouldn’t rule out some kind of love interest for him in the future.

Q: At this juncture, the TV show has veered away from the graphic novel series. If you had to choose one of the two universes, which would you say is your favorite? —therunningdead

A: Well, I’m a little biased because I’ve been writing the comics for a decade, but I consider that to be the original. The comic book is where it all came from, so I consider the TV show to be an alternate to what happens in the comics.

Q: How do you decide what information from the comics to keep the same, and what to change? —Erica Britt

A: Well that’s a long process involving all the writers, the showrunner, everybody. It’s really a matter of sitting down at the beginning of the season and working out what happened in the comics and when and how and why, and seeing if it plugs into our world. It’s a pretty organic thing. Also [it’s a chance] to set up things and do comic book moments in ways that I didn’t really do when I was writing the comics — with the benefit of hindsight.

VIDEO: A Look Ahead at The Walking Dead Season 4

Q: Are there any story lines you explored in the TV series that you’ve considered for the comic? — Dani

A: An example is that really great exchange between Hershel and Glenn, where Hershel talks about how you never know who’s the right guy for your daughter until you meet the right guy. It’s really a poignant thing that [Producer] Angela Kang wrote. I never had a moment like that between Glenn and Hershel, and that kind of thing would be nice. But the way these things work, I’m writing issues where — spoiler alert — Glenn and Hershel are dead. So it doesn’t really translate well, unfortunately. It would be nice to mine the great work of these fantastic writers on the show and make my job easier.

Q: When Merle is attracting the walkers to his car to take out the Governor, the first one to approach looks exactly like the iconic zombie from Dawn of the Dead, 1978. Was this a nod to that film? —radio118

A: It was a nod to that walker from Dawn of the Dead — and we had to do it twice. Greg Nicotero is a George Romero alum, and he wanted to do a little nod to Romero, so he made up that walker and put it in a scene. But that scene ended up getting cut, so he did it again to make sure it made it in the show.

Q: Do you ever wish you were a walker? —Amanda Calvert Simpson

A: No, never! Being a walker would be terrible. You smell bad, you’re falling apart, and I’m sure it’s really uncomfortable. But even just from a practical real-world standpoint, those guys are covered in latex and sticky paint and fake blood, and it’s hot in Georgia. I have a tremendous amount of respect for anybody who plays a walker on our show, because it is an extremely difficult job that I will never do because I’m lazy and I don’t like being uncomfortable.

Click here to read Part 1 of Robert Kirkman’s fan chat, in which he talks about killing off characters and the eerie similarities between The Walking Dead and a kid’s movie.