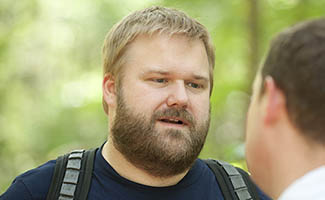 In Part 1 of Robert Kirkman‘s fan chat, The Walking Dead Executive Producer and Writer talks about killing off characters and the eerie similarities between The Walking Dead and a kid’s movie. Click here to read Part 2 of the of the interview.

Q: What was the reasoning behind having Laurie Holden‘s character killed in the Season 3 Finale? —Cancerdog

A: We were really working on the Woodbury arc, and it sort of played out that it made sense. The only thing that would make Rick accept the remainder of Woodbury would be something as tragic as seeing Andrea lose her life. The unfortunate thing about all these deaths is that right now the audience is saying, “Oh my God, why did you kill Andrea?” We understand that’s an emotional thing — it’s supposed to be — but there’s a lot of stuff in Season 4 that comes from that moment. Once the viewer sees the next season, they’ll know why we did it.

Q: How do you let the actors know their number is up? And do they get any say on the amount of blood spilled? —Ani Munoz

A: They get as much input into their death scene as any actor does in any scene. It’s a back and forth, and there are a lot of discussions that go between writers and directors and actors. As far as when they find out that they’re dying, usually it’s a call before the script comes out. It’s very late in the process. We try to be really mindful of the actor’s process — we don’t want an actor to play a scene differently because they know they’re going to die.

Q: With Rick bringing more people back to the prison, will this is some way complicate his relationship with Carl? —Diana M Sawyer

A: We’ll have to find out in Season 4, but I will say that the dynamic between Rick and Carl is going to be a central focus of the season, and it is going to change in some startling and interesting ways.

Q: Can the group survive if something happens to Rick? —Jamal Montgomery

A: Yes, absolutely. We’ve been saying that no one is safe on this show, and I wouldn’t rule out seeing the death of Rick Grimes at almost any point. We really like to keep people guessing, and I could definitely see some interesting stories coming from that. While Rick has been a pretty solid leader, he’s definitely made his share of mistakes. I think seeing Daryl or Maggie or Glenn picking up a larger leadership role in the group could pose some interesting story possibilities.

VIDEO: Inside The Walking Dead Season 3 Finale, “Welcome to the Tombs”

Q: Can you talk more about the casting process for the show? —Always Walking Dead

A: We work with our casting agent and go over a wide range of people and tons of footage. A lot of people remark on how similar our cast is to characters in the comic book series, and it is kind of a strange coincidence that as we’re looking for the best actors for the role, sometimes we’ll come upon someone who looks unusually like the way they’ve been drawn in the comic book.

A: Well, all I can really say is that the guy’s not dead, and Rick definitely knows where he is. The door is always open for an eventual return of Morgan. When or how that will happen will have to remain a mystery for now, but I think it’s definitely a possibility.

Q: There’s recently been a meme comparing The Walking Dead to Toy Story. Be honest: how much did Toy Story inspire your work? –Moot_Lagoon

A: It’s hilarious. There are definitely some eerie similarities. Toy Story is a fantastic piece of work, and it’s flattering to be compared to it in any way, but I will say that I think some of the similarities are a little bit stretched. I’ve definitely seen all three [Toy Story movies] and there’s a good bit of emotion from seeing anthropomorphic toys and their relationship to the kids they belong to, but I don’t think there’s any kind of inspiration drawn from that in The Walking Dead.

Click here to read Part 2 of the fan chat, in which Kirkman addresses the possibility of a Daryl Dixon romance and shares his thoughts on living life as a zombie.

Don’t miss the Season Premiere of Mad Men, this Sunday at 9/8c on AMC.