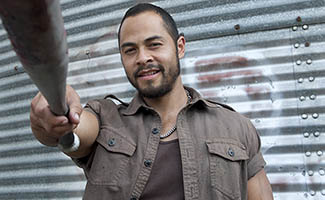 Actor Jose Pablo Cantillo, who plays Woodbury soldier Martinez on AMC’s The Walking Dead, talks about the similarity between pickled eggs and walkers and the secret to making an epic on-screen kill.

Q: Martinez gets some great moments with his baseball bat this season. Did you have to dust off any little league skills for those scenes?

A: I did have to practice, although I have a background in martial arts. I studied Jeet Kune Do and Brazilian Jiu-Jitsu. On element of Jeet Kune Do is that I had several of years of practice with the kali stick — a stick with a size and length similar to a baseball bat. It might be a little bit different, but a secret that I’ll let you in on is that on-set we’d swap out the bat for a rubber bat, which is actually weighted like a kali stick. It’s sort of to protect you from hurting yourself so that you can wield it with a little more confidence. I was able to have fun and make it look kind of flashy because of that.

Q: Martinez seems to get a real release from taking down walkers. What’s the closest thing like that for you?

A: Martial arts and surfing. In martial arts, the way that they train really does channel that killer instinct. We used to put motorcycle helmets on and go full force at each other with these sticks to train. Or we would put on the gloves, and the other guy would wear a motorcycle helmet and we would just rip into him. Knees, elbows, head-butts — you don’t have to pull your punches in those situations. There’s a little bit of an element of acting in it as well. You always motivate with a training scenario, like there’s a loved one that you’re defending or something. But in terms of my own personal enjoyment these days, surfing is the big release for me; less martial arts now that I’m getting a little bit older.

Q: Martinez has the unenviable task of ordering Andrea to give up her gun in Episode 14. Have you ever had to disarm someone?

A: My toddler, a 4-year-old, she holds on to her toys and stuffed animals as preciously as Andrea holds on to her gun. Actually just this morning we were taking her to school and were really trying to break her of that habit of bringing stuffed animals to school and every day we literally have to take five to ten minutes and talk her out of her death grip on that zebra. In terms of how dire and important those objects are, it’s certainly similar.

Q: Martinez and Daryl get pretty competitive over their walker-killing. Is that something you can relate to?

A: Last night, I was out really late at this event. And there were these nasty looking, pickled eggs in this giant jar of purple liquid at this kind of posh event. We were in line and this guy was like, “No one has touched those.” And I was like, “I dare you eat one.” And he took two and was like, “I dare you to eat three!” I’m married, I’m not trying to impress anybody, but I took the challenge. I ate two, and took a bite of the third, and then I tapped out. At least it was a half better than the guy. It’s so funny; I grew up in the Midwest, I have two older brothers, and you’re just as competitive playing football as you are eating pickled eggs, or trying to kill zombies. As long as you don’t take it too far, I think it’s a good way for people to relate.

VIDEO: The Making of The Walking Dead Season 3 Episode 13, “Arrow on the Doorpost”

Q: What’s the secret to a great walker kill?

A: There are so many different departments at play when you do a good kill. The writers write it. Then you sit down with a stunt coordinator, and they figure out your skill set. On location they bring in the effects person, and he’ll say, “It’ll be great if you can actually wield the bat in this way, and then we’ll make an even more awesome splatter.” It’s a team effort; you really have to trust all the different departments and collaborate to make the kills epic.