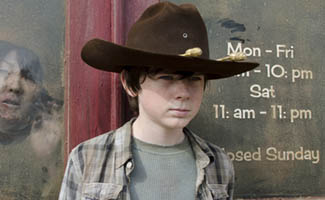 Actor Chandler Riggs, who plays Carl Grimes on AMC’s The Walking Dead, talks about why he’s not allowed to go to the cast’s “death dinners” and his most gut-wrenching scene this year.

Q: Now that Madison Lintz (Sophia) is gone, what’s it like to be the only kid on set ?

A: Luckily, some of the actors act like kids, like Steven Yuen and Norman Reedus. So I hang out with them a lot. They’re really fun guys.

Q: Carl played a big part in Lori’s death this season. Was the material in that scene at all difficult for you to process?

A: I read the script and it was just horrifying. The whole scene felt like it took a week to shoot. It was dreadful, but you just gotta get over it and get on with it. There was no way to keep those days bright and happy.

Q: What’s it been like acting on the show without Sarah Wayne Callies, your on-screen mother, and Jon Bernthal, who was a bit like a second father for Carl?

A: It’s been hard having them gone — both of them — but I learned from them in the time I did have with them. When I signed on I knew that they would eventually get killed off, because I’d read the comics. Every now and then Sarah’s on the set again. It’s been cool to see her. Usually they have the death dinners that are at bars, so I can’t go! I don’t think [I’ve been to any.]

Q: You told us last year that because of Georgia’s laws you can’t hold a working gun on-set. This season Carl gets to use a weapon more. Has that been a welcome shift?

A: It’s exciting. I love it. It’s awesome that I actually get to do something this season. This year, I’m holding the gun I got to use last year and a Beretta that’s modified to the point where it can’t do anything.

VIDEO: The Making of The Walking Dead Season 3 Episode 4, “Killer Within”

Q: Carl has matured as a character, but how have you matured as an actor over three seasons on the show?

A: When I started the show, it was kind of like, I didn’t really know what I was doing because I’d only been in movies a few times. I didn’t know what to do or which way to go. But being on the show has helped me so much as an actor, from learning from the other actors and actresses who are amazing. It’s been wonderful to learn with them and from them. Andrew Lincoln [in particular] has definitely helped me through the show.

Q: Last season you got big into playing kendama on-set in between takes. What are you getting in to this season?

A: I do a lot of video games — I have a YouTube channel where I record me playing video games with my friends and post it. That’s a hobby I have and a lot of what I do in my off time. And I actually have a movie — Mercy — coming up so I’m very excited about that.