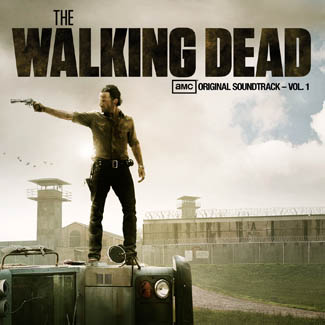 Today, AMC and Republic Records announce that “The Walking Dead AMC Original Soundtrack — Vol. 1″ is now available for pre-order on the iTunes Store for a scheduled release in stores and via online retailers on Tue., Mar. 19. Showcasing music featured on the Emmy Award-winning AMC series, this collection proves essential listening for viewers and zombie enthusiasts everywhere. Fans who pre-order the soundtrack will instantly receive a download of Jamie N Commons’ “Lead Me Home.”

Already, two incendiary tracks have been debuted in the first half of Season 3: Emily Kinney and Lauren Cohan’s powerful folk elegy “The Parting Glass,” and Baby Bee’s guitar-heavy zombie blues jam “Love Bug.” (Click here to buy the singles on iTunes.) Next up, Jamie N Commons’ “Lead Me Home” will figure prominently in Episode 12, “Clear,” on Sun., Mar. 3, followed by Fink’s “Warm Shadow” (Dactyl Remix) in Episode 13, “Arrow on the Doorpost,” on Sun., Mar. 10 and Voxhaul Broadcast’s “You Are the Wilderness” in Episode 14, “Prey,” on Sun., Mar. 17, all leading up to the album’s release date.

Click here to pre-order the album on iTunes and instantly receive a download of Jamie N Commons’ “Lead Me Home.”