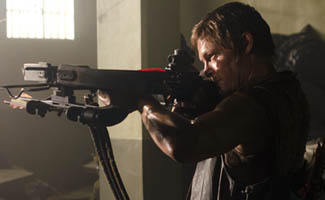 Norman Reedus, who plays Daryl Dixon on AMC’s The Walking Dead, talks about duking it out with his on-screen brother and why Chandler Riggs considers him the other kid on set.

Q: Emily Kinney told us about how they worked her skills as a singer into the show. Have any of your off-screen talents been integrated into your character?

A: I can’t sing like Emily, but a lot of my characteristics are in Daryl. I ride a bike and am good at giving people dirty looks.

Q: You’ve been riding your motorcycle on-set and off for a few years now. Have you found some good back-country Georgia roads to cruise?

A: I take it south of here and I don’t even keep track of where I am. I drive for hours. I’ve found so many new trails and so many new roads. The motorcycle Daryl rides is the one they picked out from Season 1 — it was in the background. They found that bike and left the stickers on and liked it so much they didn’t want to change anything.

Q: It’s hard to imagine anyone else playing Daryl. What are some ways you’ve made the character your own?

A: When you do television, you have this opportunity to drop these subtle hints everywhere. The way you say things, for example, sometimes those seeds turn into trees. I’ve had quite a few of those things happen. Daryl’s childhood, for example. In Season 2 when Carol kisses me after Andrea shoots at me, I flinched. That wasn’t in the script and now this year there’s a story line about how I had an abusive childhood. Having to do 16 episodes with these characters, of course we’re going to find more to do. Carol and Daryl have a stronger bond, and I’ve gotten to explore stuff with my brother, for example.

Q: Was the reunion of Daryl and Merle this season as sweet for you and Michael Rooker as it was for fans?

A: We love each other; we’re the best of friends. He’s awesome and such a powerful actor. He’s also amazing to watch. We’re similar in a lot of redneck ways already, and we’ve become more similar on the show.

Q: Michael Rooker says he gets pretty enthused about fight scenes. Did either of you go too far when you fought in the walker arena?

A: You always get hit a little bit — catch an elbow or something. The fight scenes can be really intense. That one, we could have played that two ways: We could have played it how we played it, or we could have done it like two untamable wild animals. My choice was to play it like an execution. This wasn’t about the Governor at all — it was all about the little brother and big brother dynamic, establishing who’s who.

Q: Chandler Riggs told me that he’s able to survive without many other kids on set because you’re there to be a kid with. How accurate is that statement?

A: I’m going to beat the crap out of that kid. Chandler is more adult than Steven and I put together. He hangs out all the time with us. He’s really good at gadgets and gizmos. I get a lot of goofy fan mail with toys, nerd games and stuff, and I usually just give that stuff to Chandler. He’s one of the best actors on our show, hands down, and he’s killing it this season.

Q: Daryl coins the nickname “Lil’ Asskicker,” for the baby. Did you come up with that yourself?

A: No, the writers came up with that. I kept accidentally calling her “Lil’ Ass-kisser” actually.

Q: Given all the deaths on the show, are you ever worried that your character could be the next one to go?

A: I think we all have that fear. Nobody’s safe in this world — on our show, as well as our group. Everyone is a moving target. I dont’ think anyone thinks they’re going to be on for a certain amount of episodes. They think they could go at any time, and the producers have made that clear. We are all afraid.

Click here to read an interview with Michael Rooker, who plays Daryl’s brother Merle Dixon on AMC’s The Walking Dead.