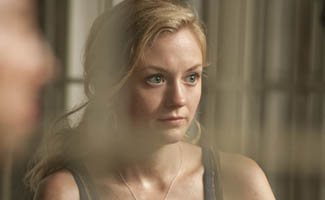 Actress Emily Kinney, who plays Beth Greene on AMC’s The Walking Dead, describes showing off her singing talents on the show, working with babies and finally getting zombie blood under Beth’s fingernails.

Q: You live in New York City. Have you completely lost your anonymity with the success of the show?

A: After that first episode of Season 3 where I sang, I noticed a little bit more of a change. Now if I’m out and about people will come up and start talking to me like they feel like they know me! And I’m like, “Oh hi. What’s your name?” It’s cool to see how many people follow the show.

Q: You sang “Parting Glass” with Lauren Cohan in the Season 3 Premiere. Were you nervous going to record in a studio for the show?

A: That was definitely a new experience. I’ve really only recorded a few times before, and last time was with a friend in his small studio. It was cool to focus more on the vocals and not the whole track. The crew has been so supportive. You finish a song and they’ll cheer. Someone was asking me if I was nervous singing, but it’s not any more than any other scene.

Q: How did the producers find out about your singing abilities?

A: [Co-Executive Producer and Writer] Evan Reilly came to one of my shows in New York City. People knew that I was a songwriter, and they knew that I could sing, but I think that Glen [Mazzara] had the idea.

Q: Do you think that singing is a good way to cope with the apocalypse?

A: I think once you have food and shelter, it makes you feel good. So yeah!

VIDEO: Inside The Walking Dead Season 3 Episode 9, “The Suicide King”

Q: You were recently on Law & Order: SVU. If you had to, would you rather be trapped in the world of The Walking Dead or the world of SVU for the rest of your life?

A: That’s a pretty tough question. I feel like The Walking Dead. On SVU, my character was pretty alone. At least on this show I still have my family left.

Q: Last season you told us about how you hadn’t gotten to kill a walker yet. Can you tell us about your first kill?

A: It was in the first episode and I can’t tell you how happy I was. I got him through the fence with a crowbar. It was really satisfying.

Q: Beth gets some good screen time with the baby. Have you two developed a bond?

A: Yeah, but then they have to switch them. I loved the first two babies, but they’re supposed to be newborns and babies get big really quickly. So they had to hire a new set of twins. But a baby crying on set adds this real feeling to it. I think I’m the best [at holding them]. Andy’s really good with the babies, too. Maybe it’s because he’s got kids.

Q: Beth has to deal with an injured father this season. Have you ever had to care for an injured family member?

A: Not quite in the same way. My mom did have to have a surgery this last year. I was so concerned about her all the time and I remember feeling so sad that she had to go through that. I think that any of us can kind of imagine someone we’re really close to getting hurt. Even if you know they have to go through the pain to get better, it’s the worst thing because you just want to help.

Q: Beth and her family had to leave the farm at the end of last season. Have you ever dealt with the challenge of leaving a place that you loved to go somewhere else?

A: When I was little we moved around a lot actually. In second grade I think I went to three different schools. We were in Nevada, and Oregon and as well as a few different places in Nebraska. I did go to high school in the same town. One thing I remember that was interesting was going to my parents house for the first time once they had moved somewhere else and just that feeling of it being so different. It’s good because it makes you see that your family is why you’re together.