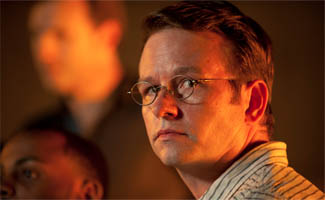 Actor Dallas Roberts, who plays Milton on AMC’s The Walking Dead, talks about his geeky street cred and a secret rivalry that developed on the Season 3 set.

Q: Milton is quite the egghead. Did you do anything especially geeky to prepare to play him? Hit up some trivia nights? Sit in on some graduate school seminars?

A: I was the guy literally in the chess club who decided to wear a bow tie for the last two years of high school, so I obviously wasn’t trying to get the ladies. I understand that part of Milton. I find that with any good run on a show with good writers, they put something on paper and you put something back on film and that affects what they put on the paper the next time. It’s been a growing, evolving relationship with Milton and I feel like hopefully everyone is working together to make him as great as possible.

Q: How has the gig differed from your expectations?

A: When you get a job on The Walking Dead you imagine you’re going to be running through the woods with a lot of weaponry shouting, “Look out!” But I haven’t had to do a lot of that this season. Woodbury is a completely different setting than our sort of crack team of apocalypse survivors have dealt with — it’s much more civilized and organized. People who had guest starred in Season 2 would be like, “Is this the same show?”

Q: Is there any rivalry between the Woodbury actors and the prison gang?

A: The early episodes are either highly prison or highly Woodbury-centric — it’s rare that those two locations would work on the same day. I don’t think I met Andrew [Lincoln] or Norman [Reedus] until Episode 8! But we started to write letters to each other on the makeup mirrors. Laurie would write like, “Woodbury’s great,” or “What are you guys doing?” or “Woodbury rules.” And then the next day, Andrew would write back something like, “We’re coming to kill you.”

VIDEO: The Making of The Walking Dead Season 3 Episode 11, “I Ain’t a Judas”

Q: Do you think your character, Miles, from AMC’s Rubicon would like The Walking Dead?

A: It’s funny, the first day I walked up to his office on the Rubicon set, there were a bunch of comic books on his wall. And I started to read comic books and The Walking Dead was one of the ones I picked up. I had never been a comic book guy before, but by virtue of trying to find out about Miles a little bit more, I ended up stumbling upon The Walking Dead. So I was a big fan of the comics and continue to be today.

Q: At Woodbury, there’s a lot less zombie slaying going around, but if you were going to pick out a weapon for Milton, what would it be?

A: That’s the bad thing about being Milton; you don’t do a lot of zombie slashing. The good news about that is that you’re not running through the woods with a bunch of fake blood caked all over you. I don’t even know what weapon they would give Milton. Some sort of slingshot, maybe.

Q: Are you hoping that Milton will bloom into a full-blown mad scientist?

A: Eagle-eyed viewers will recognize that literally every idea that Milton has forwarded since he showed up on the show has failed. That will probably keep the megalomania necessary for a true mad scientist from taking hold.

Click here to read an interview with David Morrissey, who plays Milton’s boss the Governor on AMC’s The Walking Dead.