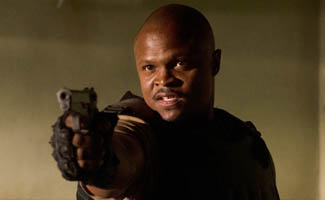 Actor IronE Singleton (T-Dog on AMC’s The Walking Dead) describes the mysterious call that portended his character’s fate and mulls the possibility of T-Dog resurrecting as a zombie rapper.

Q: T-Dog’s walker kill count this year seemed a lot higher than in previous seasons. Was that a welcome shift?

A: The first episode, I got enough kills to last for the next four seasons. People were always asking, “T-Dog, how many walkers are you going to take out?” Before, when I didn’t have any, I would tell people “I have about 500 kills — off-screen.” Like all those times the camera moves, he was taking out walkers. But this season I got enough to make up for the first two!

Q: As one of the Atlanta natives on the show, did you doing anything to help welcome the cast back to your city?

A: I had a screening with people here at the house. We had 150 people here, so you know I was excited. My wife did a terrific job of putting things together — she handles all of that stuff. My job was just to post when they got here and do my Walking Dead song.

A: Have you heard it? It’s my version of what a zombie would talk about if a zombie could talk. I’m rapping. And the beat is so hot!

Q: How did you learn that this season would be T-Dog’s last?

A: I found out early on. Glen [Mazzara] and I were playing phone tag. I was talking to my wife, thinking Glen is calling me but he’s not telling me what it’s about — that’s not a good sign. Normally when you call someone, you explain what you want to talk about. But he just kept saying, “IronE, I want to talk to you.” Once we had the conversation — it was probably around Episode 1 — I was kind of bracing myself for it. It wasn’t a crushing blow; I was like, “I understand.” And I started to prepare myself.

Q: How did you prepare?

A: This was my season to reflect — my emotional season. I was thinking of all the good times we had and just relishing the moment and taking it all in, because I knew that it would come to an end shortly.

Q: Did you have to come up with an elaborate excuse to tell anybody why you were home early from the set?

A: I’d normally say, “Well, production lasts until November, maybe December, so things are looking really good. So far so good!” My family knew all about it. I couldn’t keep that away from them. But other than that it’s top secret. I don’t know what else I’d tell my wife; if I’m here more often than I was in the past, she would have been like, “Ok why are you home?” What am I going to say?

Q: What was it like to go to work in a prison?

A: It was air-conditioned, which I don’t think we’ve had since the CDC at the last episode of Season 1. It was blazing hot at the farm last year, so yeah, that was very refreshing. It was hazy because they had just put together the prison and there were a lot of chemicals in the air. Harmless, we were told. But I ended up wearing my mask a lot. But it was still nasty and filthy; it seemed like a real prison. We were all closed in and it just felt really real.

Q: Do you have anything at home to immortalize T-Dog and your time on the show?

A: I got T-Dog’s shield, and every cast and crew member signed it. Seemed like I had 300 signatures on it. That again told me what everybody thought of me, and that they appreciated me as much as I appreciated them. And of course, I also have my Walking Dead song.

Q: Maybe T-Dog could be reborn as a zombie rapper —

A: Crazier things could happen! Shane has been back on the show, so T-dog could too. I would love to come back as the rapper zombie one day.

Click here to read an interview with Melissa McBride, who plays T-Dog’s fellow survivor Carol on AMC’s The Walking Dead.