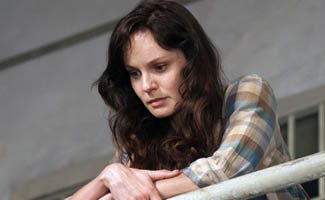 Actress Sarah Wayne Callies (Lori Grimes on AMC’s The Walking Dead) talks about her character’s final moments and a secret tradition of the cast.

Q: That was a powerful episode! What was it like to watch your character meet her end?

A: It was interesting because we shot [Episode 4] in June. There was a whole emotional process of getting it together and shooting it, grieving and saying goodbye to everyone. That process was more or less complete a while ago. And then I sat down and watched it! I was nervous because I was expecting it to hurt, but I was so proud of Chandler [Riggs] and proud to say I was a part of helping to build that show. I think Lori’s death did justice to that; she was a remarkable and powerful woman and she was given a remarkable and powerful death. Pride and gratitude were what I came away with.

Q: When did you find out that this season would be Lori’s last?

A: I was at a refugee camp in Thailand in February. I came back and got off the plane and basically did an interview right away. I got off of that call and got one from Glen Mazzara, who said we’re going to lose Lori. It was an interesting sequence of events because my mind was not on the show at all; it was wrapped up with issues about medical care and gender safety in this refugee camp. I think it put it in its proper perspective: which is that it’s very hard and very sad and it’s a television show. I’m grateful I got to do this for two and a half seasons.

Q: After you left the set in Atlanta, was it difficult to keep Lori’s death a secret?

A: Most of what I told people was true, which was that this season has such a big cast that it takes place in two locations — and every character has time off. But I was also deliberately misleading people…There have been a lot of questions that I’ve had to answer really creatively. I’m really relieved that I can stop doing that now.

Q: Did you do anything in particular to put your character to rest?

A: We started having death dinners for everyone who got killed off the show beginning in Season 1. After some one’s last episode, all the actors would go out to dinner together and raise a glass to them. Those dinners became a big tradition. We’re a bigger cast so we have to be a bit more private. Steven came up to me during Episode 1 this season and he said, “I don’t think you should have to do your own death dinner,” and he said he’d do it for me. And I said, “Wow, that’s incredibly sweet.” And he came up to me a week later and said, “How do you do it?” And I said, “You find a restaurant that has a private room and you tell them that you’re throwing a birthday party.” And he kept coming up to me, and was like, “But which restaurant?” It ended up being, adorably, twice as much work! The whole cast came though and I said a farewell.

VIDEO: The Making of The Walking Dead Season 3 Episode 4, “Killer Within”

Q: Looking back, what are some favorite memories from being on the show?

A: One of my favorite movements was watching Andy Lincoln drive! I think he got his license about a year before we started the show. And he’s English. Watching Andy try and drive the Cherokee was hilarious. At a certain point we had to pull it over because green flames were coming out of the hood. He’d never really get it into gear because the labels that showed you what gear you were in were gone. In a late episode last season, Lori is on the porch while Rick and Glenn are leaving to go after Hershel. I’ve said goodbye to Rick and he’s supposed to drive away, but he couldn’t get that thing into gear! He was just staring daggers at me.

Q: Was there anything about playing a pregnant woman that was similar to the experience of being pregnant?

A: The belly — the pregnancy rig — was a trip. No matter what I had for breakfast, when I put that belly on I was starving, every time. And people just knew eventually and they would have a chicken sandwich ready for me. They had the belly in foam originally, but I told them to put the fifteen pounds in — the way a baby would weigh — so I don’t have to act it. It jacked up my back pretty good. But playing a pregnant woman is way easier, because you can take it off.

Click here to read a Season 2 interview with Chandler Riggs, who plays Lori’s son Carl on AMC’s The Walking Dead.