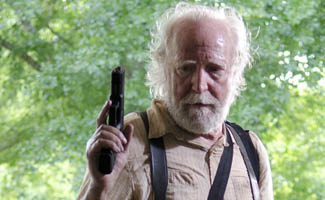 Q: When you found out that Hershel was going to get bitten by a walker in the first episode, were you worried that was going to be it for him?

A: When Glen (Mazzara) told me they were going to chop my leg off, of course my first thought was, “Oh, there I go!” But just the opposite: He said he wanted someone with a disability and I understand that. It’s also very interesting that Hershel was the first one to have survived a bite. The question I think for Hershel is whether he is going to become a liability for the group. Is he going to be able to carry his load?

Q: What kind of prosthetic did Greg Nicotero fashion for the scene?

A: They did a cast of my leg, Greg Nicotero and his group, and that’s the leg you see a part of after they chop it off in Episode 1. It’s a pretty brutal scene; I got some responses from people who were really taken aback by it!

Q: How do you think this disability will change the character — and your portrayal of him?

A: He needs to show that he is combat ready and that he can contribute. His age and his life experience helps a bit. But I’m hoping right now that sometimes he’ll have a prosthetic.

Q: Hershel’s got a lot more hair this year. Whose idea was it to make him look so unkempt?

A: At the end of last season I decided that I wouldn’t cut my hair until this season started. So I started growing it, not knowing anything about how this season was going to start. I started letting my beard grow as well. I felt I could always cut it off if it didn’t work. But then I saw everyone involved and they all liked it, because they thought it showed a passage of time. It also shows that he has undergone a transformation since they were driven off his farm. So I think he’s coming to terms with his new reality. Hershel is letting his hair down, so to speak.

Q: Last year you told us about growing up in Georgia. Do you still have family in the area?

A: I’ve been visiting my mom, who’s in South Georgia. I graduated from high school there and I try to visit as often as I can.

Q: How do you and the other cast members blow off steam when you’re not on set?

A: This year, we’ve been playing a little golf. I have to say my game has been getting worse, not better.

A: I could make some enemies here! Andrew’s (Lincoln) game is really coming along. And David’s (Morrissey) got a good game too. And one of the directors, Jeff January? His uncle won the PGA tour way back years ago. He has the sand wedge that he won the PGA tour with in his golf bag.