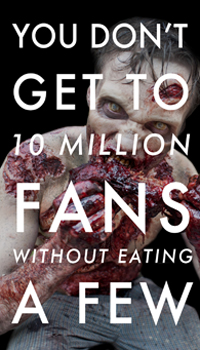 3. 10,000,000 is the number of bicycles in Beijing
While Beijing’s population may have skyrocketed to 20,000,000 in the last few years, China’s second largest city actually estimates the number of bikes in the city is nearly half that, thereby giving the concept of “rush hour” a whole new meaning.

4. 10,000,000 is also the miles covered if you circled the world 402 times
The distance around the globe at the equator is about 24,900 miles. That means if you were driving non-stop at 60 miles per hour (using a car that could move across water, of course), you’d be traveling for 17 days to make the trip just once. Getting your speedometer to the 10,000,000 will take some time.

Furthermore
10,000,000 is more than the populations of either New York City (around 8.2 million) or Switzerland (7.9 million) or the annual number of visitors to the Louvre (8.5 million).

Within the Facebook universe, 10,000,000 fans is more than the number of Likes accumulated currently by American Idol (9.6 million), Tosh.0 (8.8 million), Star Wars (8.6 million) or the Olympic Games (3.7 million). It’s even more than Facebook Likes for Michael Phelps (6.4 million) or Paris Hilton (1.4 million). Just imagine what happens when The Walking Dead Season 3 arrives!

If you haven’t liked The Walking Dead on Facebook, isn’t it about time?