Q: When will The Walking Dead Social Game be released?

MM: I know there’s a lot of interest in the answer to this one. To be frank, we got excited about the project during development and started adding more features, which extended the development timeline.

While we don’t have an exact date yet, I can tell you that the game is about to enter a closed testing phase in limited areas in the next couple weeks. The global public launch will be sometime later. We’ll know better exactly when a worldwide launch will happen once we’ve gotten some results from this more intensive testing period. When we have information to share we’ll keep the Facebook group and The Walking Dead blog up-to-date.

SG: If you compare this to any other game on Facebook, the sheer scale of the environments and the number of environments we’re launching with is more than what most games have after they’ve been out for a year.

MM: That’s right. And we’ll continue to add features, content, and characters while the game is live and people are playing.

Q: What were some of the challenges to creating a The Walking Dead game on Facebook?

MM: The first challenge was, how do we let players have fun in the world of The Walking Dead while staying true to the original story in the show and the rules of the world?

SG: The tricky part has been to make the kind of game that a normal Facebook audience can play while also providing the same level of satisfaction to someone who’s grown up playing computer games. It’s more than just clicking around: It’s playing the game and playing the system. And with that, we’ve tried to get in the suspense and the scare-tactics and tension.

Q: Is the game free to play?

MM: Yes, it’s free to play. But similar to many Facebook games out there, you can buy premium items like energy and weapons using Facebook Credits. 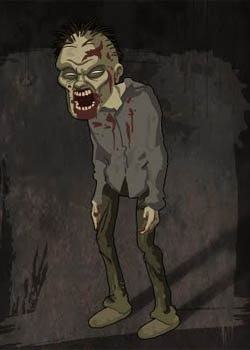 Q: How did the show inspire the design of the walkers in the game?

LR: We definitely pulled as much as we could from the actual show, especially if it was a zombie that seemed more of a character than just background. We wanted the players to recognize zombies from the show in the game.

Q: Will we meet some iconic walkers in a pre-zombified state?

SG: Yes. We’re excited about one you encounter in the very first chapter of the game.

Q: What kind of weapons will players get to use?

JJ: You’ll have the chance to get some of the weapons that characters from the show use. I think fans will be really excited about that. We have Shane’s semi-automatic and Rick’s Python and Glenn’s machete in there. And of course you have your quintessential knife to go ahead and stab right into the walker’s brains.

BM: You may have a really nice shotgun, but you can also use it to smack down a zombie.

SG: One of our favorites is the one that Andrea uses in the Season 2 Premiere — the screwdriver.

Q: How did you approach the gore in the show for a Facebook audience?

SG: We’re going to have zombie feasts, so when you die you’re going to get eviscerated. As a player, if you do well, you’ll get the decapitations and so forth. But I don’t think it is gratuitous. We think it serves a purpose to making it feel more like the show.

Q: How did you go about designing the environments and game boards?

LR: We did extensive amounts of research on how each level looked. We really want it to look like the corresponding environment from the show. There were a couple times when I actually went out into Atlanta and took some pictures to make sure I got the area right. Down to the number of cars or the amount of tanks in a scene, we definitely tried to stick as closely to the show as possible so when fans see a certain stage, they know exactly where they are and what part of the show they’re in.

Q: What aspect of the game are you most excited for fans to see?