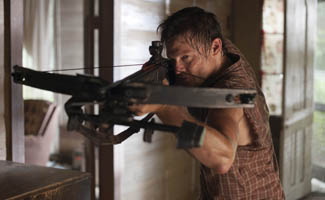 This week, Robert Kirkman teases Season 3 to TV Guide and David Morrissey speaks carefully to the BBC about playing The Governor. Plus, Norman Reedus talks bows and arrows with USA Today. Read on for more:

• David Morrissey tells the BBC he’s “very excited” about joining The Walking Dead as The Governor: “It’s a great team and I’m looking forward to joining them.”

• Walking Dead Forums reports that filming for Season 3 will begin in Senoia, Georgia this May.

• Jon Bernthal chats with The News Tribune about the importance of the cast working as an ensemble. Bernthal also tells the Portland (Oreg.) Mercury that Shane’s character arc “is not about whether Shane dies, it’s about that death resonating with Rick and Carl and Lori.”

• Comic Book Resources reports on the Q&A that Robert Kirkman recently did at the Emerald City Comic Con.

• People’s World says The Walking Dead “will not only come to be regarded as a huge contribution to the zombie genre — it will come to define it.”

• Multichannel News reports that only two non-sports programs cracked the Nielsen Top 10 in the first quarter — and one of them was The Walking Dead‘s Feb. 12 Midseason Premiere. (No Link.)

• Fast Company magazine lauds AMCtv.com’s The Walking Dead Story Sync for figuring out how to “create a truly interactive television viewing experience without detracting from the program itself.”